History of the Dartmoor Pixie  Band

Back in 1919 near Whiddon Down in Devon a 3 year old Bob Cann  first picked up a one row melodeon and played 'now the day is over' with one finger.  He was born into a musical family and learned a lot from his two uncles George and Jim who both played squeeze boxes.  He played for dancing from a young age either solo or with various other local musicians.  By the 1940's he was playing for regular dances accompanied by Mrs Eccles on piano and her son on drums.  The band at this stage was simply known as 'Bob Cann and his band'. 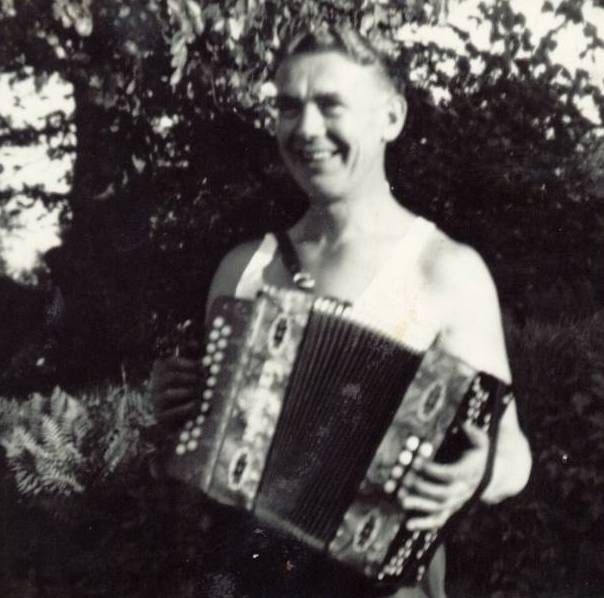 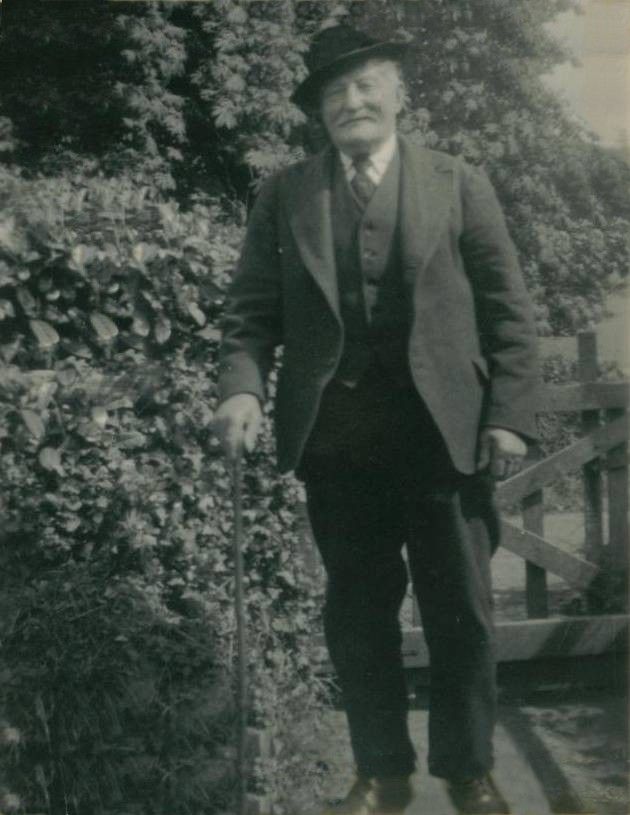 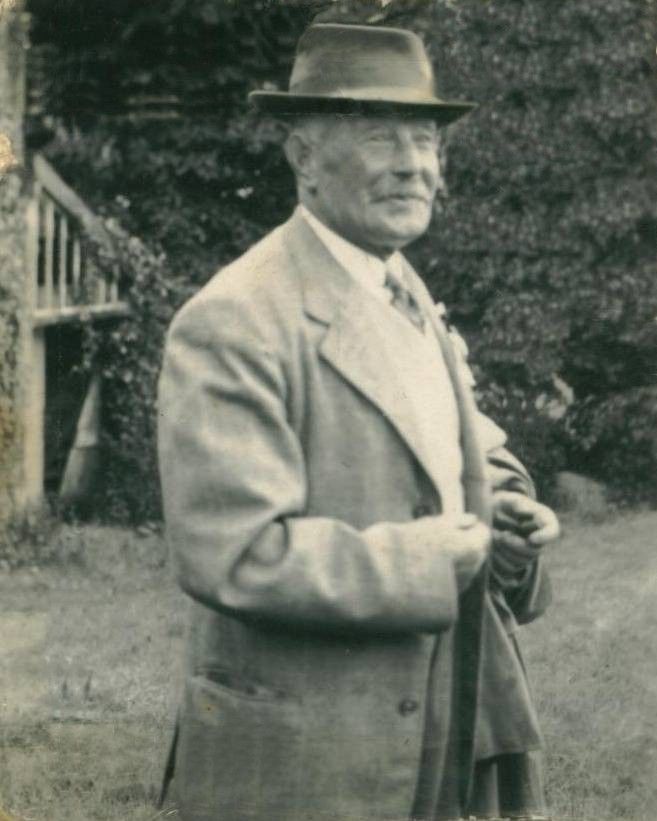 In 1972 Tom Barriball from Launceston  joined Bob playing 5 string banjo and later Hawaiian guitar!  (Apparently  he'd tuned it in banjo tuning).  At this time it was just the two of them  with Dave Evans calling the dances.  A year later in 1973 Bill Murch joined  the band on mouth organs and melodeon and it was at around this time that Bob taught himself  to call the dances and play melodeon at the same time.  Dance classes were  regularly held at village halls around the area where dancers would learn not  only the different moves but the whole dances.  At many dances Bob would  simply announce the name of the dance and people would get up and do it without  walking it through.

1974 saw the addition of Cyril May also on  mouth organs and melodeon.  On new years eve 1974 the band were playing for a dance at Fingle Bridge, near Drewsteignton, a picturesque location at the bottom of a  deep valley on the edge of the moor.  Several inches of snow fell that  evening and the band and all the dancers were stranded there for the following  two days.  Fortunately only about half of the guests had made it due to the  weather so there was quite a lot of food left over after the dance.

In the early 70's the  band had two occasional drummers, Roy Parish and Arthur Sandy, and in 1975 a  young Ian Kielly joined the band on drums.  The following year 1976 saw the addition  of Kath Mortimore on piano accordion.

in 1977 Bob retired from his job as Farm  Manager due to ill health and soon took to his music to earn a living.  It  was around this time that he named the band 'The Dartmoor Pixie Band' and called  himself 'Pixie Bob' for his solo bookings.  Bob hadn't mentioned this and  Bill Murch recalls reading a local newspaper and seeing one of their dances  listed as 'The Dartmoor Pixie Band' and commented to Bob "I see the band has a  name now then?" 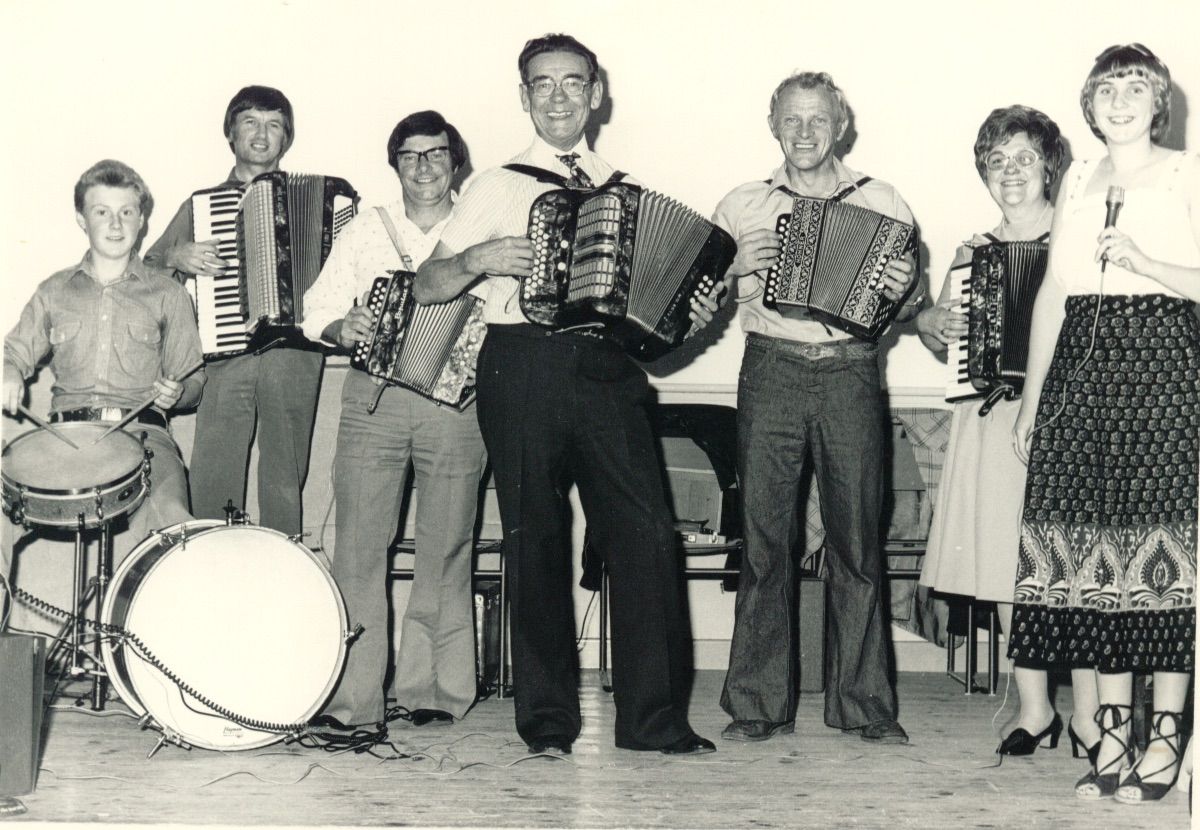 The music in Bob's family seemed to skip a generation and in 1978 Bob's grandson Mark Bazeley at the age of 6 picked up one of Bob's anglo concertinas and started to play 'daisy daisy'.  Bill  Murch's son Rob started having lessons with Tom Barriball , first on ukulele  then on 5 string banjo and from about the age of 8 both Mark and Rob would sit  at the back of the stage at Pixie Band dances learning the tunes. 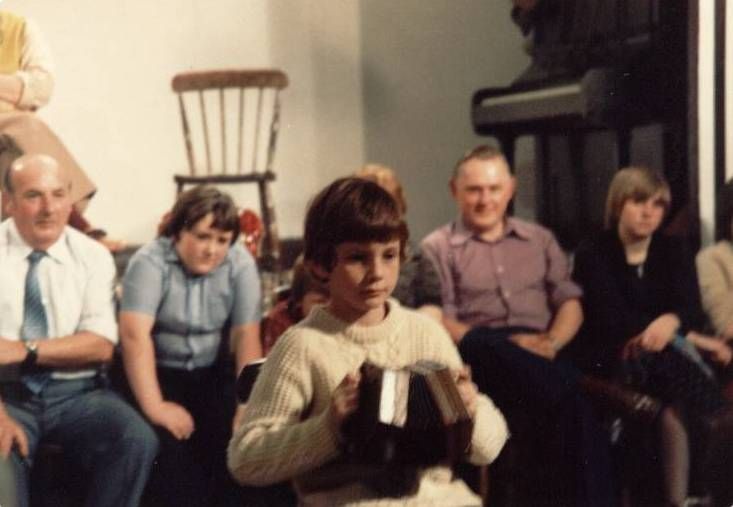 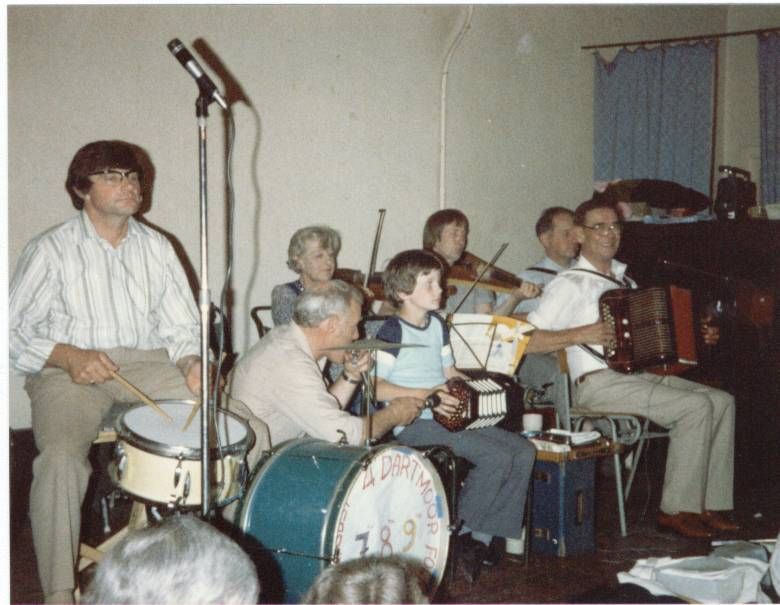 By 1981 Ian had left the band and the  drummers seat was immediately filled by Cyril.  See photo above.   Unknown musicians joining in with the band, sat behind Bob.

In 1983 Bob bought a new melodeon, A  Hohner Ouverture V and Mark now about ten became the owner of his red Hohner  Club IIIM.  During the 80's other musicians played in the band including  Kate Marriot on fiddle, Jimmy Elliot on whistle and clarinet and Derek Byron on fiddle. 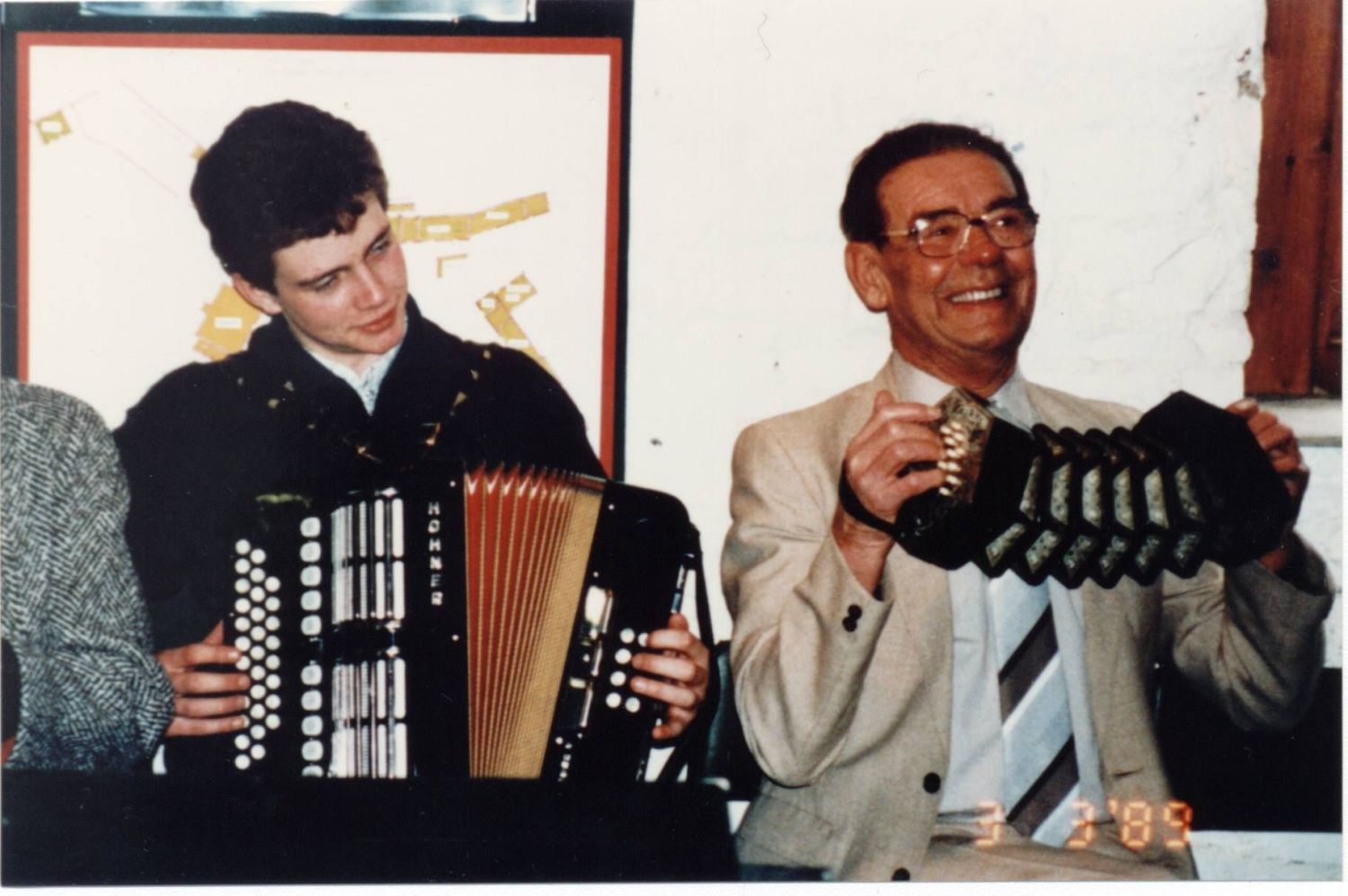 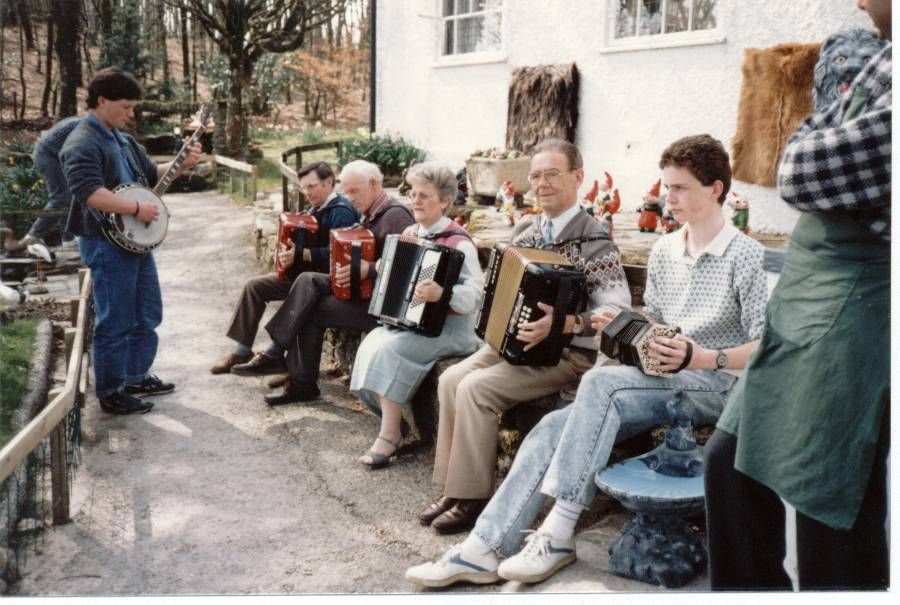 By 1989 Mark at the age of 16 had started  playing Bob's melodeon in the band while Bob called the dances and sometimes  played the concertina.  It was about this time that a young Sarah Vanstone  who'd been coming to the dances with her parents had started to call the dance  moves to herself whilst dancing.  Bob spotted this and persuaded Sarah to  call a couple of easy dances.  At each dance that Sarah attended she would  call a couple of dances and her confidence grew.

Bob passed away on 25th May 1990 aged 73.   Over 400 people from all over the country attended his funeral at South Tawton  church.

During the early 90's  the band were part of a BBC Radio 2 series with Stuart Hobday called 'Barn  Dance' and the band along with  a coach load of dancers and supporters went to the Pebble Mill studios in Birmingham with 'Pixies On  Tour' written across the back window.  The band were also filmed at a dance  in South Zeal for a German television programme called 'Alternative Britain'.

Bill left the band at the end of 1994 and 1995 saw the gradual loss of their banjo player Rob.  The band continued with Mark, Kath,  Cyril and Sarah and in July 1995 Mark and Sarah were married.  A month  later at the 18th Dartmoor Folk Festival Mark overheard someone playing one of  Bob's tunes in a style very similar to his own.  Upon investigation he  discovered it to be Jason Rice and found out he was the grandson of Jack Rice, a  good friend and musical companion of Bob's, hence the similarity in musical  style.  By the end of the day Jason was a member of the band and already  knew many of the tunes and played on stage at the end of the music hall to an  audience of some 400 people.

At the Dartmoor Folk Festival in 1999 a  familiar face came strolling down through the marquee carrying a banjo case.   Within the first tune it was like he'd never been away.  Rob rejoined the  band and in no time was playing better than ever.

In 2001 Ed Rennie, the melodeon player  with the Bismarcks who'd recently moved to Devon started to play banjo and bass  guitar in the  band on occasions when Rob wasn't available.  In 2003 he was presented with his first proper gig list and informed he was a qualified Pixie!

In 2005 Kath became ill  and although she continued to play in the band occasionally she later became too  ill to play.  She sadly passed away on 31st January 2006 having been a member of the band for almost 30 years.  She's very much missed.

In 2018 Ed the band's bass player for 17 years took a break from the band. Doug Lander and Matt Norman currently share the bass player role in the band.

The band continue to take bookings some 12 months in advance mostly throughout Devon but also at ceilidh clubs and festivals across the country.